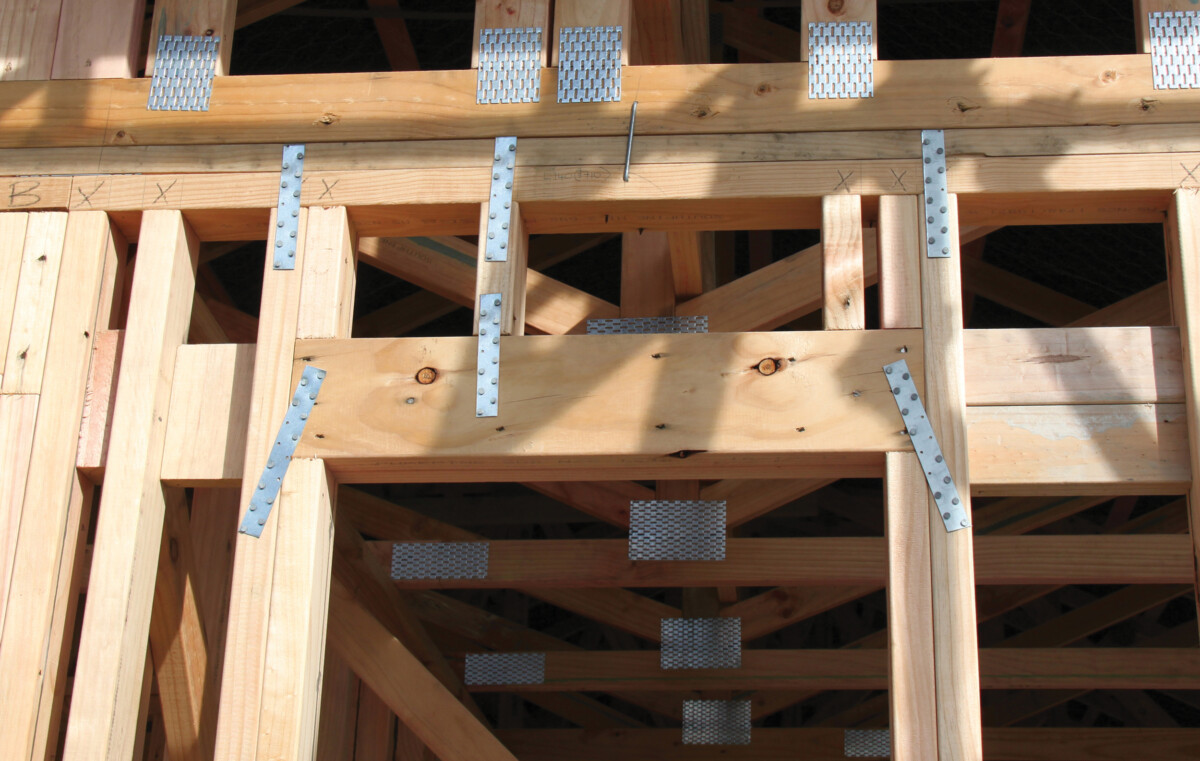 BRANZ regularly receives queries about hold-down fixings to the exterior walls of timber-framed buildings. This overview sets out the fixing requirements in NZS 3604:2011 for resistance to uplift for the various framing members

In high wind conditions, roofs are subject to powerful uplift forces. Both the roof and its framing must be securely fixed, so the uplift forces travel down through the building structure to the foundations.

Where a roof is supported by a lintel over a window or door, it is critical that the load is properly transferred around the opening.

However, it can seem strange to have multiple straps and other hold-down fixings on exterior walls of timber-framed buildings where there are openings in the wall and none to other walls where there are no openings. BRANZ is often asked if this is correct?

NZS 3604:2011 Timber-framed buildings provides solutions for resistance to wind uplift for the different parts of the building by tying the building structure together with fixings, including bolts, nails and metal straps. NZS 3604:2011 is an Acceptable Solution to Building Code clause B1 Structure.

NZS 3604:2011 is a stand-alone solution, so if you are using this pathway to show Building Code compliance, it is important to use the solutions in the standard.

Clause 2.4.4.1 relates to nails generally, and Table 2.2 is a reference guide for fixing requirements and describes the types and capacity of fixings.

The roofing must be secured to the tile battens or purlins in accordance with the manufacturer’s requirements. E2/AS1 also has information on fixings and layout for some roof materials.

The fixings/connection for roof members are specified in NZS 3604:2011 Tables 10.1 to 10.18. Specific requirements for truss fixings will be stated on the truss layout plans provided by the truss supplier.

Each strap must be fixed with 6/30 × 2.5mm nails into both the lintel and the trimming stud. Alternatively, a fixing with a minimum 7.5kN capacity in tension along the line of the trimming stud may be used.

Fixing the bottom of walls

Fixing the trimming stud to the floor joist, continuous boundary joist or solid blocking of a timber-framed floor applies to a single-storey building or to upper floor framing to the intermediate floor. Fixing is with a 25 × 1mm strap with 6/30 × 2.5mm nails into both the joist or solid blocking and the stud. Alternatively, a fixing providing a minimum of 7.5kN in tension may be used.

Where ground floor framing is on a concrete floor slab, the strapping is folded under the bottom plate and fixed to each side of the stud using 6/30 × 2.5mm nails. A proprietary anchor that meets the requirements of NZS 3604:2011 clause 7.5.12.3 or a cast-in bolt must fix the bottom plate to the slab within 150mm of the stud.

Proprietary fixings are available for all locations requiring to be secured against uplift. These include timber connectors, stud straps, stud anchors, cleats, bottom plate fixing anchors and hold-down brackets.

NZS 3604:2011 does not allow for plywood or any other wall lining, either to the exterior or the interior of the wall framing, to substitute for the connections required between the wall framing members to resist wind uplift forces. However, several proprietary solutions can provide for this.

Distribution of fixings can seem uneven

Complying with NZS 3604:2011 requirements to resist uplift generally results in numerous straps and fixings to the wall framing wherever there are openings for windows or doors. However, other parts of the wall where there are no openings may only have nail fixings.

This distribution of fixings may seem uneven, but the wind uplift forces transferred from the section of roof above the lintel to point loads at each end can be quite large, especially when the opening below the lintel is wide. These forces must then be transferred to the two trimmer studs (at each side of the opening), so higher capacity fixings are required than provided by nailing only. These concentrated forces must then be transferred to the ground via the connection at the base of the trimming stud. To do this, nail straps or other proprietary fixings are required.

Finally, it is better to have a relatively even distribution of stiffness and connections around the perimeter and throughout a building. A similar distribution and spacing of hold-downs will homogenise the behaviour of the structure under extraordinary loadings such as storms or earthquakes.

These are minimums, you can do more

Remember, NZS 3604:2011 prescribes the minimum standards necessary to attain compliance. It should never be a barrier to designers and builders providing better options to the construction of the building, especially where the time and costs to do so are relatively minimal.